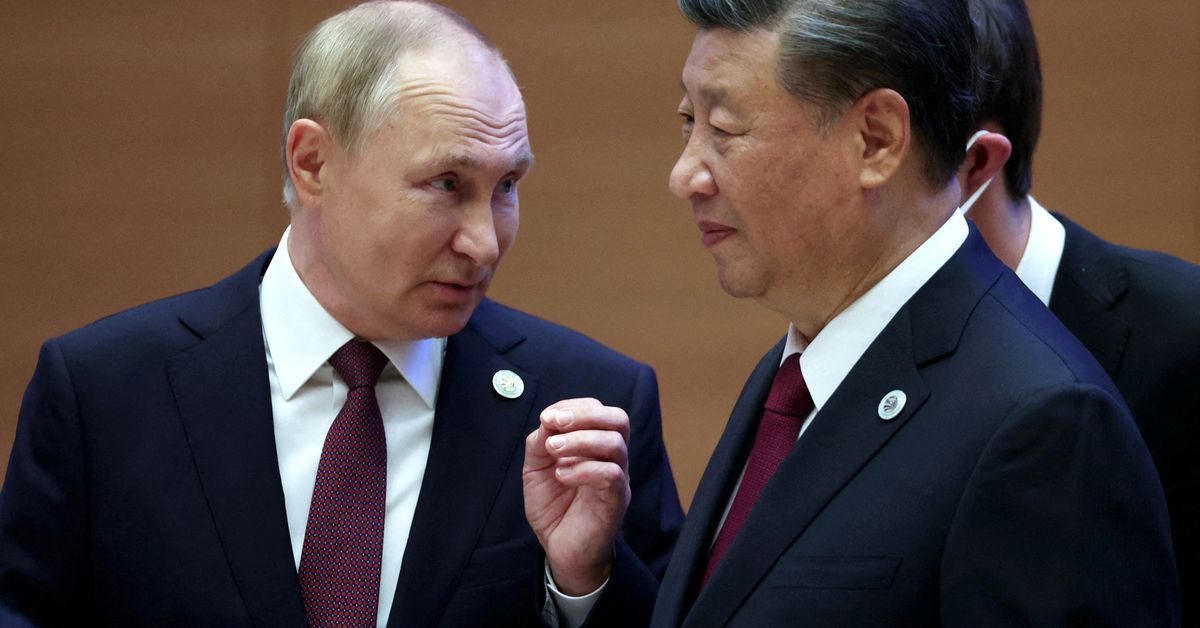 Sept 22 (Reuters) – Xi Jinping is unlikely to abandon his “old friend” Vladimir Putin, even as the Russian leader’s decision to send thousands more troops to Ukraine and his nuclear threats strain Beijing’s “no limits” partnership with Moscow, experts said.

China will instead dig in on its awkward stance of calling for dialogue and peaceful resolution while refusing to condemn Russia’s invasion of Ukraine, they said.

On Thursday, Foreign Minister Wang Yi told his Russian counterpart Sergei Lavrov on the sidelines of the United Nations General Assembly in New York that China would to stick to an “objective” and “fair” position.

Xi and Putin have grown increasingly close in recent years, bound by their mutual distrust of the West, and reaffirmed their partnership just days before Russia invaded Ukraine. But China has been careful not to provide any direct material support that could trigger Western sanctions against it.

Putin acknowledged those limits last week when the two met for the first time since the war began, in Uzbekistan, describing Xi as having questions and concerns about the Ukraine situation and praising him for his “balanced” position.

“I don’t see how different any new position will be … China doesn’t support the war, it doesn’t support conflict, that’s been very clear from the beginning,” said Henry Wang Huiyao, founder of the Beijing-based think tank Center for China and Globalization.

Russia says its actions in Ukraine are a “special operation” to degrade its neighbour’s military capabilities and root out people it calls dangerous nationalists.

Although China probably hoped for a short war, Putin’s battlefield moves in Ukraine – seeking to counter recent defeats – are unlikely to concern Beijing or change the substantive nature of the countries’ relationship, analysts said. The governing factor remains geopolitics, including Beijing’s competition with Washington.

Economic cooperation between the two giant neighbours is likely to grow as China reaps the benefits of more and cheaper energy supplies while Russia offsets losses from European Union bans. read more

“What matters most to Xi is that Putin does not fail or make a mess of the invasion that could cause collateral damage to China, mostly in the economic sphere,” said Steve Tsang, director of the China Institute at SOAS University of London. “The basic driver behind Xi’s foreign policy is to put China first.”

STAY OUT OF THE MESS

Official Chinese media provided little coverage of Putin’s latest speech, even after it roiled global markets and drew condemnation from Western powers. The comments, however, were heavily discussed on China’s Twitter-like Weibo social media, drawing a mix of shock and criticism that censors did not remove, as well as support.

Yuan Jingdong, an associate professor at the University of Sydney, who specializes in Chinese defence and foreign policy, said he expected China to continue treading the fine line of refraining from publicly criticising Russia or openly showing sympathy towards Ukraine, while also refraining – as best it can – from endorsing Putin’s actions.

“Since Putin’s national security adviser (was) in China when Putin made the announcement, there could be some reassurance from China to Russia of the importance of the bilateral relationship, but also clear indication of what Russia can realistically expect from China,” he said.

“At this point, Beijing’s option seems to be to stay out of the mess and growing danger Russia’s invasion has led to,” he said.