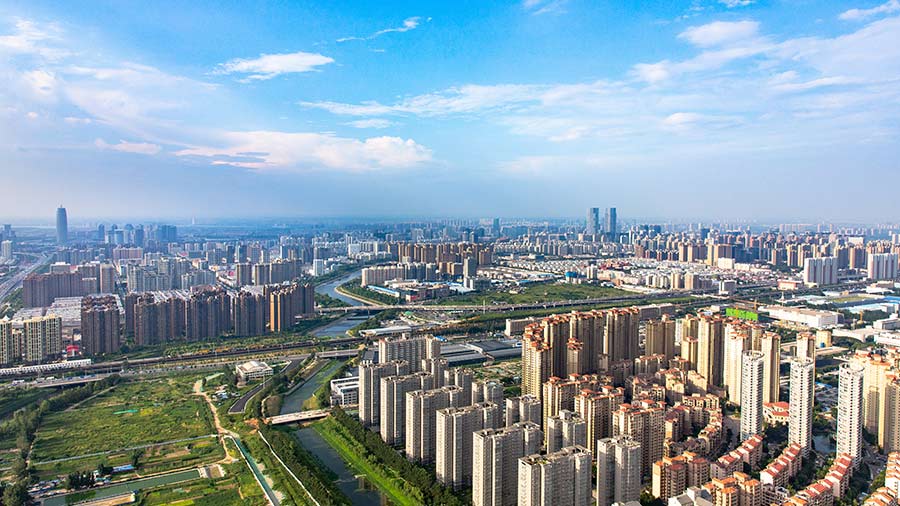 With China determined to reform its “hukou”, or household registration system to solve migrant workers’ residency challenges, boost urbanization, and spur domestic consumption, Zhengzhou may become the first Chinese megacity to declare a ‘zero threshold’ for hukou registration.  The Zhengzhou Municipal Public Security Bureau has currently published an exposure draft of its amended hukou guideline for comments and feedback. We discuss the draft and its implications for China’s regional economies.

Zhengzhou, the capital city of east-central China’s Henan province with a population of over 12 million, is likely to become the first Chinese megacity to abolish household registration restrictions to stabilize the real estate market and attract talents.

According to an amended hukou guideline released by the Zhengzhou Municipal Public Security Bureau on September 6, 2022, those who want to settle in Zhengzhou (including the downtown area) can apply for hukou registration of the city freely, as long as they have legal and stable employment or residence (including rental) in Zhengzhou, regardless of the length of their social insurance participation period and residence period in Zhengzhou. The spouse, children, and parent can apply along with the main applicant together.

The amended hukou guideline is still an exposure draft, which is open to comments until October 6, 2022. Currently, the downtown area of Zhengzhou is excluded from a similar hukou relaxation policy that has been implemented in Henan province for over two years.

Once Zhengzhou’s amended hukou guideline gets passed, Zhengzhou will become the first megacity in China to achieve a zero threshold for hukou registration.

Hukou is a household registration system in China – similar to an internal passport – used by the government to regulate population distribution within the country. In practice, the hukou system restricts freedom of movement, the allocation of labor resources in the economy, the equality of urban and rural residents’ status, and the urbanization of cities.

China introduced the hukou system in 1958. Under the system, a hukou book is assigned to each household to classify the resident’s hukou by their place of origin.

With respect to rights and entitlements, those holding rural hukou are distributed arable land for their livelihood while urban hukou holders have access to government jobs, subsidized housing, education, and healthcare.

The entitlements of urban hukou holders, however, vary in different Chinese cities, such as those offered in megacities versus smaller cities. Chinese citizens can also transfer their hukou in certain circumstances, such as during study and work.

Migrant workers can be granted an urban hukou if they fulfil certain criteria. This includes the level of educational qualification, technical expertise, entrepreneurship, etc. The process is more complicated in larger cities where the labor market is highly competitive.

Regardless of the role played by hukou in the context of China’s progress, it has gotten its fair share of criticism. The inability of migrants to gain hukou in urban areas has caused a variety of social problems, such as “left-behind” children. It has also likely dampened economic growth by slowing down urbanization, and therefore productivity and consumption. Given this, China has been endeavoring to reform its hukou system for years.

Why does Zhengzhou plan to fully remove the hukou restrictions?

There are several reasons why Zhengzhou is planning to relax hukou restrictions.

First, the relaxation of such measures is strongly related to the status of the city: being Henan’s provincial capital, Zhengzhou is considered a key hub to accelerate and promote high-quality development in the Chinese central region. According to the province’s 2022 Government Work Report, Henan hopes to make Zhengzhou a leading force in its regional development. However, the current performance of the city is slightly inferior to such expectations, hence it needs to attract a strong talent force to help it fulfil its role.

According to the China Population Census Yearbook, as of 2020, Henan province had lost over 16.1 million workers to more developed areas in the Yangtze River Delta and Pearl River Delta regions. Thus, attracting new talents and ensuring a smooth relocation are top priorities for the provincial capital. To attract the return of the population in the whole province, strengthening the provincial capital is one important step.

A larger population base is conducive to the expansion of consumption, employment, infrastructure, and industrial development. Zhengzhou has a population of less than 13 million in 2022 so there is plenty of room for growth. The city is planning for its population to reach 18 million by 2035.

A second reason for the hukou relaxation is saving Zhengzhou’s struggling real estate market. Experts feel that attracting potential buyers to the housing market is one of the objectives of this policy U-turn. Indeed, driven by large-scale urban renovation projects, which have been going on since 2015, the Zhengzhou real estate market is now facing a situation of oversupply.

A third reason is aligning with national-level policies, such as the New Urbanization Implementation Plan discussed in the 14th Five-Year Plan (2021-2025), which have repeatedly emphasized that the economic and population carrying capacity of central cities and urban agglomerations should be enhanced in areas with economic development advantages. In the next phase of urbanization, the Chinese government has attached a renewed importance to cities in the central part of China – lowering or even cancelling the requirements for settlement would be an important manifestation of this role.

What are the implications of Zhengshou’s recent hukou relaxation?

The announcement from the Zhengzhou municipal government can be considered a huge leap forward, given the size of the city and its population. As of 2022, Zhengzhou counted a population of 5.6 million in its urban area, making it one of the 14 megacities in China.

However, Zhengzhou shall be the first megacity – those with over 5 million population in the urban area, to essentially scrap the household registration in the whole city.

According to the recent Census in China, the country has seven super megacities (超大城市) – those with over 10 million population in the urban area, including Shanghai, Beijing, Shenzhen, Chongqing, Guangzhou, Chengdu, and Tianjin – and 14 megacities (特大城市), including Wuhan, Dongguan, Xi’an, Hangzhou, Foshan, Nanjing, Shenyang, Qingdao, Jinan, Changsha, Harbin, Zhengzhou, Kunming, and Dalian.

Status of hukou reform in other megacities in China

In recent years, many smaller cities and first-tier cities like Beijing and Shanghai have gradually relaxed the restrictions on household registration.

In addition, new first- and second-tier cities, such as Hangzhou, Wuhan, and Xiamen, have also further relaxed the restrictions on the settlement of college graduates. For example, Hangzhou allows newly graduated students to make hukou registration before they find a stable job, within two years of their graduation.

As of 2021, at least 15 provinces across China have proposed to fully liberalize their hukou restrictions, including Shijiazhuang, Kunming, Nanchang, Yinchuan, Fuzhou, Jinan, and other provincial capitals.

These incentives, however, tend to favour young and educated workers rather than those without higher education qualifications. Many migrants have thus continued to struggle to gain hukou in the urban areas where they’ve been working.

In 2021, the National Development and Reform Commission (NDRC) issued the 14th Five-Year Plan New Urbanization Implementation Plan, which proposes to completely abolish the hukou restrictions in cities with a permanent urban population of less than 3 million, and comprehensively relax the hukou registration conditions for large cities with a permanent urban population of 3 million to 5 million. This is not the first time that the NDRC has mentioned the relaxation of hukou registration rules in small and medium-sized cities.

As early as 2019, the NDRC published an Urbanization Plan, requiring that cities with populations between one and three million lift all limits on hukou registration. In addition, the plan stated that cities with populations of three to five million had to reduce limitations on new migrants and abolish restrictions on essential demographic categories, including university and vocational college graduates. Meanwhile, the plan also required local governments to promote essential public services for permanent residents and expand urban infrastructure to accommodate population growth.

In fact, even prior to the 2019 Urbanization Plan, small and medium-sized cities and municipalities which counted less than one million permanent residents had already begun to gradually relax their restrictions on household registration.

Hukou reforms such as these ultimately aim to reduce the inequities between different types of hukou holders and improve labor mobility in the economy. It also seeks to boost domestic consumption as migrant workers without urban hukou often keep more savings for future needs, including marriage, education, and retirement.

Hukou reform is therefore an important part of China’s broader economic reform policy, which seeks to transition the economy towards expanding and advancing the services sector and boosting domestic consumption. Reducing restrictions on labor mobility through hukou reform also widens much-needed access to social services and offers a boost to the country’s transitioning economy.

When placing people at the heart of socialist development, reducing hukou limitations and eventually dissolving them is about more than simply increasing economic growth and consumer possibilities – it’s about societal development. Ultimately, as China strives to avoid a demographic decline marked by low birth rates, reducing personal burdens imposed on workers because of hukou inequalities could speed up the pace of reform.

China Briefing is written and produced by Dezan Shira & Associates. The practice assists foreign investors into China and has done so since 1992 through offices in Beijing, Tianjin, Dalian, Qingdao, Shanghai, Hangzhou, Ningbo, Suzhou, Guangzhou, Dongguan, Zhongshan, Shenzhen, and Hong Kong. Please contact the firm for assistance in China at china@dezshira.com.