The Heirloom Market and Bakery suffered extensive damage from a fire. It appears to have started in the front of the building, investigators said.

COWETA COUNTY, Ga. – Fire marshals say the fire that gutted a Coweta County landmark on Wednesday evening started in the front of the historic building.

Firefighter spent several hours battling the blaze at Heirloom Bakeshop and Market located along Georgia Highway 54 near Sharpsburg. Flames were seen shooting through the roof as crews poured water on the structure using ladder trucks.

During a tour of the century-old structure on Thursday, fire investigators say they spotted the greatest amount of damage in the front, where their investigation now centers.

SKYFOX Drone flew over the burned out building on Thursday. The second floor appears to be completely destroyed, and the roof collapsed into the building.

Ten people were inside at the time the fire started. All were able to make it out safely.

Over the past century, the building has been used as a restaurant and shop for several owners. The iconic building, located near the Coweta-Fayette county line, has had additions to the original structure. 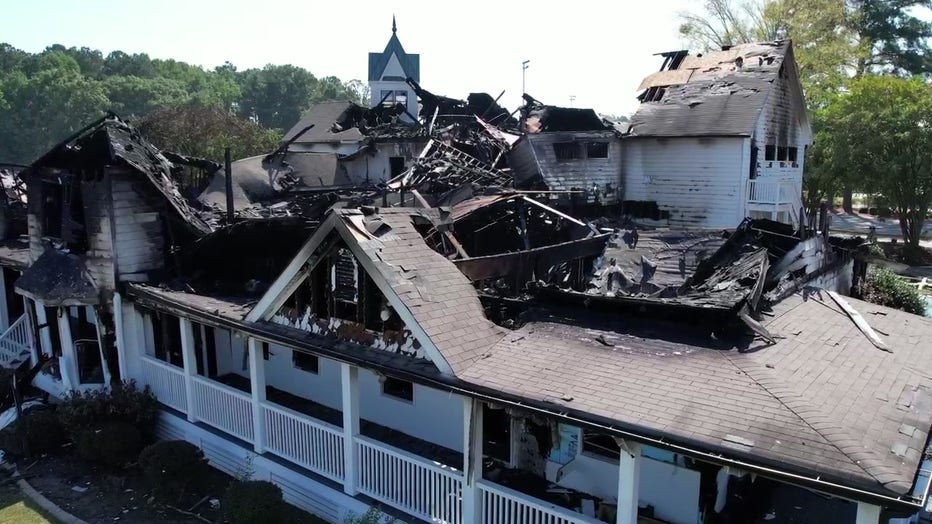 New owners had recently renovated the building and opened as the Heirloom with more than 50 boutiques as well as the popular bakery. A GoFundMe page has been started to help support owners Justin and Laura Gibson.

The business is less than a mile from the Peachtree City Walmart that caught fire earlier this month and also interrupted traffic along Highway 54.

The cause of the fire remains under investigation.