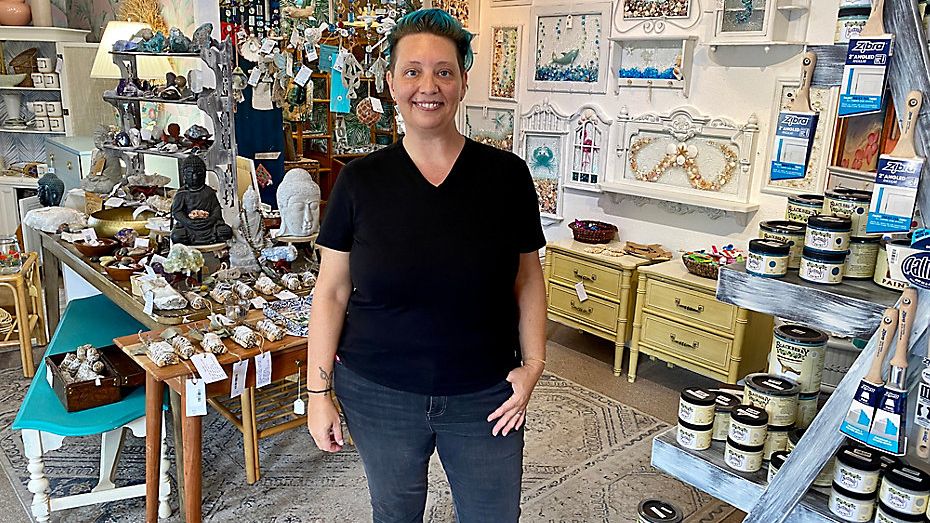 GULFPORT, Fla. — The artist and owner of Beach House 5317 in Gulfport, Jamie Edwards, says she turned the trials of opening a business during the pandemic into a triumph as she recently celebrated its second anniversary.

“We actually didn’t have that tough of a time in the beginning,” she said. “I think now at our two year point is more when we need that real community support to really show up for us again.”​

What You Need To Know

Beach House 5317 sells painted furniture, art, vintage clothing, jewelry, crystals, home decor and other gift items. Edwards said her specialty is painting furniture, and she shares her expertise with others.

“I’ve taught several of the artists in the store how to paint furniture also, because I cannot do it all myself,” she said. “It’s very therapeutic painting furniture.”

Edwards said she likes to help people thrive and rents space in her store to about 30 other local artists who didn’t have anywhere to sell their craft work.

“I love to feature new, young, unique talent, as well as established artists, to give everybody a shot to have a brick and mortar to sell in,” she said. “We’ll have featured artists for a month. We have people who have been here since we opened.”

Artist Hannah Kirkpatrick said she’s grateful to rent a corner in the store to sell her curated clothing.

“It’s definitely really helping, because people can come try on things, instead of just having to go off measurements and just looking at it online,” she said. “I think it was an amazing move to open a space to host other artists to help them out.”​

Edwards said in August of 2020, she saw the building was available and talked her wife into signing a lease.

“I happened to drive by this store and saw the ‘For Rent’ sign and I called my wife and I said, ‘Hey, you want to open up a store? You think now’s the time to do it?'” said Edwards. “I said, ‘If we open now and we can get through this crazy period of time, we’ll be great on the other side of it.'”

She said the business has climbed steadily since she opened, and last month Edwards launched an online store to help boost sales. She said it’s an unusual move in the industry because all of the items sold are ‘one-of-a-kind’ and it takes a lot of work to upload the images.

“Most businesses in the industry, they don’t have a website like this because it’s a lot of extra support for the artists,” she said. “That most people don’t take the time to do.”

With multiple artists sharing space under the same roof, Edwards said she screens everyone to make sure they’re the right fit for the art shop.