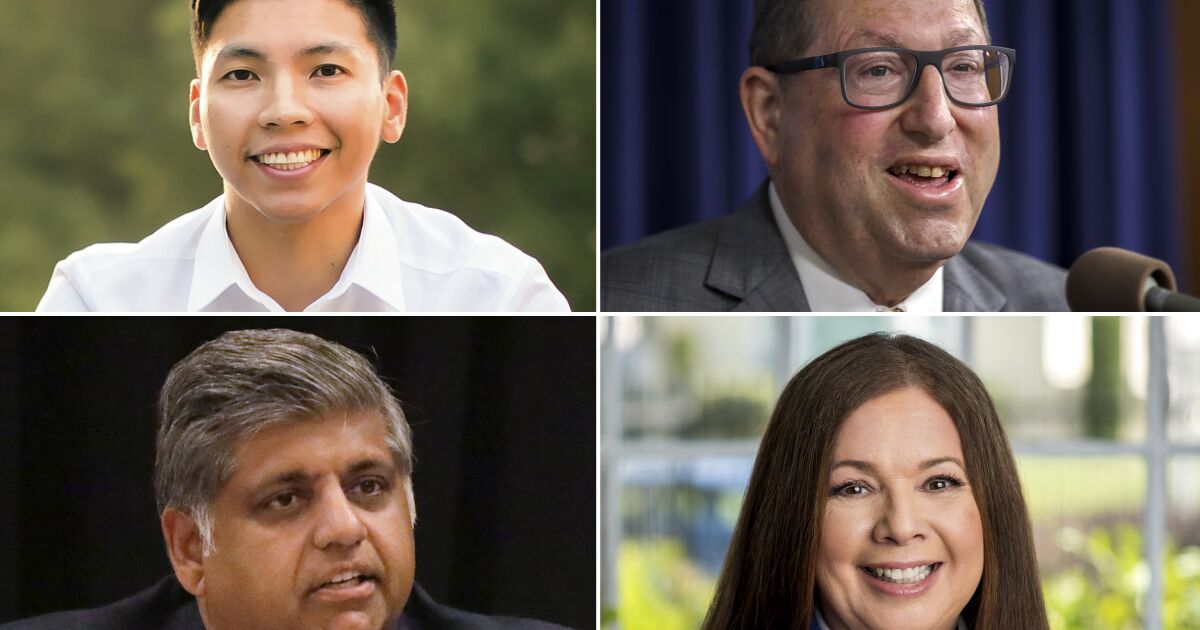 Voters on Tuesday cast ballots for the next Los Angeles city controller and city attorney, choosing among a field of mostly outsider candidates.

The election results may not be known for weeks following new state policies to encourage mail-in voting. Some candidates who led on election night in the June primary fell behind as more votes were counted.

The outcomes of the races to replace City Atty. Mike Feuer and City Controller Ron Galperin — who must step down because of term limits — are seen in part as bellwethers for the power of the city’s far-left voters.

While Koretz and Feldstein Soto have pitched themselves as more centrist, Mejia and Gill have vowed to kick up the status quo. They have support from activist groups such as Ground Game, Sunrise Movement Los Angeles, and Jane Fonda Climate PAC, and both campaigned on holding the Los Angeles police department accountable.

Gill said that if elected, he would impose a 100-day moratorium on filing charges on misdemeanor crimes to allow time to study whether to permanently cease prosecuting certain offenses.

That proposal became an issue in the mayor’s race as candidate Karen Bass withdrew her endorsement of Gill, with Bass saying she disagreed with the moratorium.

Gill campaigned as a progressive reformer, yet has a varied background, having worked as a senior policy advisor in the Department of Homeland Security under then-President George W. Bush. In 2006, he spoke out publicly against a marriage equality amendment in Virginia and the next year he ran unsuccessfully as a Republican for a seat in that state’s House of Delegates. He has said his political views have evolved.

Feldstein Soto cast herself as a pragmatic leader with extensive managerial experience, which includes working as a partner in corporate law firms with specialties in bankruptcy and acquisitions.

She called Gill’s moratorium plan “absurd” and suggested it would bring criminals to L.A. to take advantage of it.

The role of city attorney should not be a “political job” but one of “competence,” said Feldstein Soto, who pledged not to run for another elected office. Past city attorneys have run for mayor and district attorney while in office.

Feldstein Soto also said tamping down corruption would be a priority if she was elected to the city attorney’s office, which was raided by the FBI in 2019. Two attorneys have been charged in a scheme related to the Department of Water and Power.

Feldstein Soto has suggested she would bring more scrutiny to no-bid contracts and the “misspending of public funds.”

The winners of Tuesday’s races will be part of the biggest turnover at City Hall in nearly a decade, with voters ushering in not only a new city attorney and city controller, but a new mayor and a handful of new council members.

Koretz, who represents a Westside district, is among those termed out. A former Assemblyman and West Hollywood council member, Koretz had strong backing from the City Hall establishment in his race for city controller.

He is closely aligned with organized labor, particularly unions that represent public employees. But few unions put money into the controller’s race.

One exception was Laborers’ International Union of North America Local 300, which provided funding for the Committee for a Sane L.A., a group opposed to Mejia’s campaign.

As a city council member and chair of the committee overseeing the city’s Animal Services Department, Koretz helped pass laws to protect animals, including banning puppy mills. But his record was criticized after Times articles detailed howdogs spend long stretches of time in the kennels without walks and other animals suffer with inadequate care at the city shelters.

Mejia, who was already using his two Corgi dogs in his campaign, seized on the issue, and began volunteering at the shelters and writing about his experience on social media.

A one-time organizer at the L.A. Tenants Union, Mejia used his campaign to scrutinize city spending and explain the little-known work of the controller, who serves as auditor and chief accounting officer.

He finished nearly 20 points ahead of Koretz in the primary, a coup for a little-known candidate facing an entrenched politician.

Koretz’s campaign spent much of its time seemingly attacking Mejia in the run-off, even launching a web site dedicated to criticizing the frontrunner.