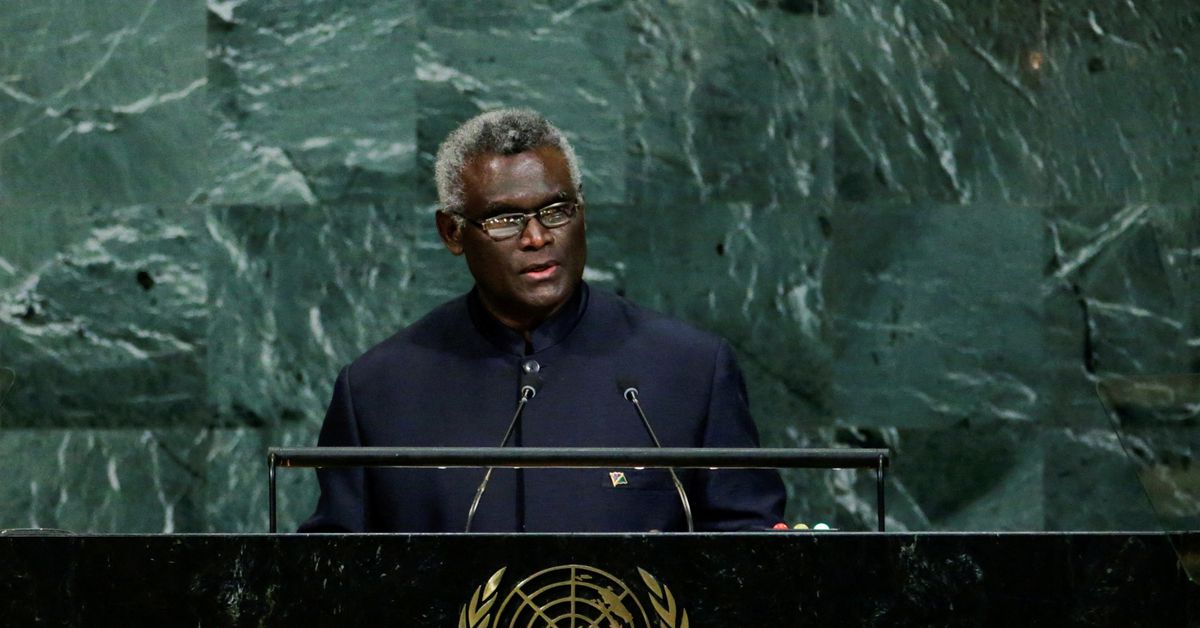 UNITED NATIONS, Sept 23 (Reuters) – The prime minister of the Solomon Islands complained on Friday that his country had been subjected to “a barrage of unwarranted and misplaced criticisms, misinformation and intimidation” since formalizing diplomatic relations with China in 2019.

In an address to the United Nations General Assembly in New York, Manasseh Damukana Sogavare said the Solomons had been “unfairly targeted” and “vilified” in the media. He said such treatment “threatens our democracy and sovereignty.”

The Solomons formerly had diplomatic relations with Chinese-claimed, self-governed Taiwan, but switched recognition to Beijing in 2019. It has since appeared to move ever closer into China’s orbit, to the alarm of the United States and other Western countries concerned about Beijing’s security designs in the Pacific.

“This decision was reached through democratic processes by a democratically elected government,” Sogavare said of the recognition of China. “I reiterate the call for all to respect our sovereignty and democracy.”

Sogavare said the Solomon Islands had adopted “a ‘friends to all and enemies to none’ foreign policy.”

“In implementing this policy, we will not align ourselves with any external power(s) or security architecture that targets our or any other sovereign country or threaten regional and international peace. Solomon Islands will not be coerced into choosing sides,” he said.

“Our struggle is to develop our country. We stretch out our hand of friendship and seek genuine and honest cooperation and partnership with all.”

The Pacific islands region has become a new theater of geopolitical competition between China and the United States and its allies.

This competition intensified this year after China signed a security agreement with the Solomon Islands, prompting warnings of a militarization of the region. read more

Sogavare has since repeatedly appeared to snub the United States, heightening Washington’s concerns.

Last month he skipped a planned appearance with a senior U.S. official at a World War Two commemoration. His government then did not respond to a U.S. Coast Guard vessel’s request to refuel and then announced he was barring all foreign navy ships from port – while he was welcoming a U.S. Navy hospital ship on a humanitarian mission.

Sogavare has been invited to take part next week in a summit that U.S. President Joe Biden will host with Pacific island leaders, through which Washington aims to show a stepped up commitment to the Pacific region.

Biden’s chief policy coordinator for the Indo-Pacific, Kurt Campbell, said this week he looked forward to conversations with Sogavare and said the Solomons would benefit from a variety of planned new initiatives.

However, he added: “We’ve also been clear about what our concerns are and we would not want to see … a capacity for long-range power projection.”

Beijing and Honiara have said there will be no Chinese military base under the security pact, although a leaked draft refers to Chinese naval ships replenishing in the strategically located archipelago.