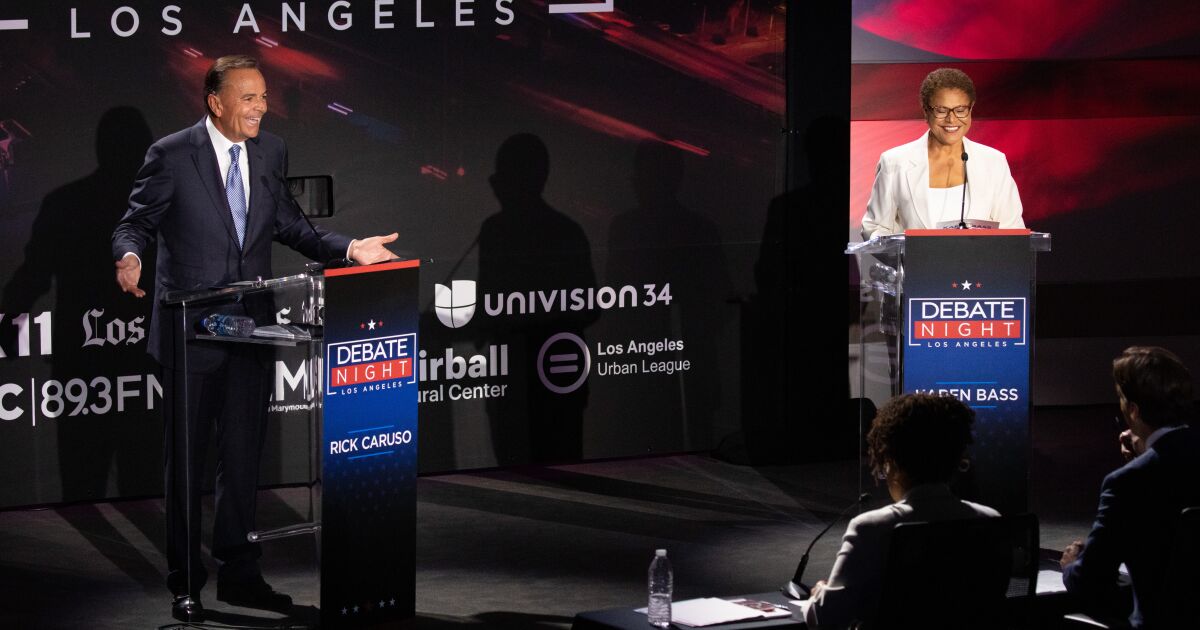 Wednesday night’s debate between L.A. mayoral hopefuls Karen Bass and Rick Caruso offered the public its first chance to see the candidates one-on-one ahead of the Nov. 8 election. Here are key takeaways from the debate:

Bass repeatedly slammed Caruso, a new approach for a candidate who has largely left the attacks to her allies.

She spoke in personal tones about her recent home burglary, telling Caruso that she was “disappointed” with his response to the incident. Sounding icy and measured, Bass said questions about whether her guns were legally stored and registered were an “act of desperation.”

“You remember when the Grove was burglarized, I called you to find out how you were,” she said. “And instead, you call on me to prove one thing or another.”

Later, Bass dinged Caruso for his repeated changes in party affiliation, noting that he’s shifted twice between Republican and no party preference before registering as a Democrat this year.

“That’s the problem,” Bass said, “is that you can’t just keep going back and forth like that.”

Some of her jabs at Caruso were more lighthearted. Responding to a question, Caruso expressed support for having street vendors on the sidewalks outside his flagship shopping mall, prompting Bass to quip, “It’ll be interesting to see street vendors in front of the Grove.”

There was lots of talk about local issues, including homelessness and housing regulation. But the debate had a decidedly national viewpoint, with mentions of migrants being sent to Martha’s Vineyard and the recent Dobbs Supreme Court decision.

Caruso attempted to distance himself from his prior Republican affiliation and his endorsement of former Ohio Gov. John Kasich for president in 2016. He said doesn’t share a set of values with the Republican party now. Supporting Kasich was an effort to prevent Donald Trump from becoming the GOP nominee, he said.

“We have Republican governors that are shipping people to different cities that have been used as props,” Caruso said. “That’s wrong. It’s disgusting. I don’t agree with that. I don’t want to be a part of that party.”

Bass started the debate by noting she is a “lifelong pro-choice Democrat” — a reference not lost on anyone in the audience or in the city who has watched her hammer Caruso for previously supporting antiabortion politicians.

They agreed on some things

Bass and Caruso have both pledged to appoint an “ethics czar” if elected to help ensure Los Angeles City Hall avoids future scandals.

Bass said Wednesday that Norm Eisen, the chief ethics lawyer for President Obama, would “do a top-to-bottom review” of all city policies if she is elected.

She also said she would ask any appointee of hers to make an ethics pledge to “make sure that we have a very clean administration.”

Both candidates said that they believed the city’s eviction moratorium should be extended, but that the policy needed to be tweaked.

“We cannot allow more people to become homeless by the moratorium going away,” Bass said. “But at the same time, we also need to help the landlords, especially the mom-and-pop landlords.”

She said the moratorium should be extended, but landlords should also be assisted.

Caruso took issue with the blanket nature of the moratorium, saying that the city’s housing department needs to create a verification system where struggling tenants can show proof that they are unable to pay. If such a system can be put in place, the moratorium should be extended, Caruso said.

“I am more than happy to support somebody to stay at a reduced or no rent until they can get back on their feet as long as you prove that you can do that,” Caruso said. But, he continued, if someone is making money and can afford rent, “they shouldn’t be carried.”

The moratorium as it exists “is not fair to anybody,” Caruso said. “So we can make it right.”

The topic of homelessness produced some emotionally resonant exchanges between the candidates.

He laid out his plan to house 30,000 people on an interim basis by building 15,000 new tiny homes and placing another 15,000 in “sleeping pods” in empty warehouses and other buildings.

Bass responded that this was effectively an expensive band-aid solution and that he had not thought through how to pay for the services to help the people he’d put in these beds.

“My problem with Rick’s plan is it just calls for shelters,” she said. “You have to have shelters, but you have to move people into permanent supportive housing.”

Caruso knocked Bass, saying that the crisis of homelessness has only worsened while she was in public office. He was also more forceful in saying that law enforcement needs to have a role in keeping the streets clean.

He also brought up remarks that she made to the Wall Street Journal in which she said that the city isn’t going to “solve the problem of the unhoused in four years.”

Caruso got the most laughs

Caruso and Bass both seemed comfortable sparring, but the developer had the audience chuckling throughout the hourlong debate.

At one point, Bass and Caruso tangled over the state of the Democratic party. Bass described the party as more “diverse in every single way” compared to the past.

“Doesn’t seem to be accepting me,” Caruso said, to much laughter in the room.

At another point, someone in the audience sneezed loudly. Caruso didn’t slow down, inserting the phrase “God bless you” as he continued his answer.

When Bass rated her sense of safety as a 5 on a scale of 1 to 10, Caruso’s grim joke received quite a few laughs.